Before we dive in too deep, here are some disclaimers. I am an Olympus Visionary, a brand ambassador for Olympus Malaysia. I am not doing a review for the Olympus Workspace. This blog article is merely an overview of what is new and what has changed from the previous Olympus Viewer 3. All my images shown from my Olympus OM-D E-M1X article recently were fully post-processed with Olympus Workspace. Since I was provided early access to the software before release, I was using a pre-production version, which may slightly differ from the finalized public release on the official launch.

Here is a brief video showing screen capture of my desktop PC running the new Olympus Workspace. In the video, I have highlighted improvements and new features of the software.

I was keeping the video as brief as possible. If there is enough interest, in coming future I can do a short tutorial on using the Olympus Workspace, or a sit down session on how I post-process my images from a real shutter therapy session.

1. The bare structure of Olympus Workspace is still similar to Olympus Viewer 3, with improvements in overall layout, allowing better customization.

2. The settings/adjustments are arranged in multiple tabs, which is very similar to Capture One Pro style.

3. The image viewing and navigation area have several different layout options, also similar to what Capture One Pro offers.

4. The overall speed in previewing images, zooming into 100% view, going through different images have been vastly improved. Olympus Viewer 3 was annoyingly laggy and slow. The new Olympus Workspace is not exactly 100% smooth but the performance jump is immediately noticeable. The brief pause/lag when dragging the image around during preview is still here but much more tolerable now.

5. Previewing the changes to the image live after adjusting the settings (sliders) is drastically speedier and smoother now. The speed is still nowhere as instant as Capture One Pro or Lightroom, but not to the point of slow Olympus Viewer 3 speed of waiting several seconds for a simple white balance setting tweak to show up in preview. The changes are seen live within half a second or less. The experience is still not seamless and instantaneous, but the improvement is significant. 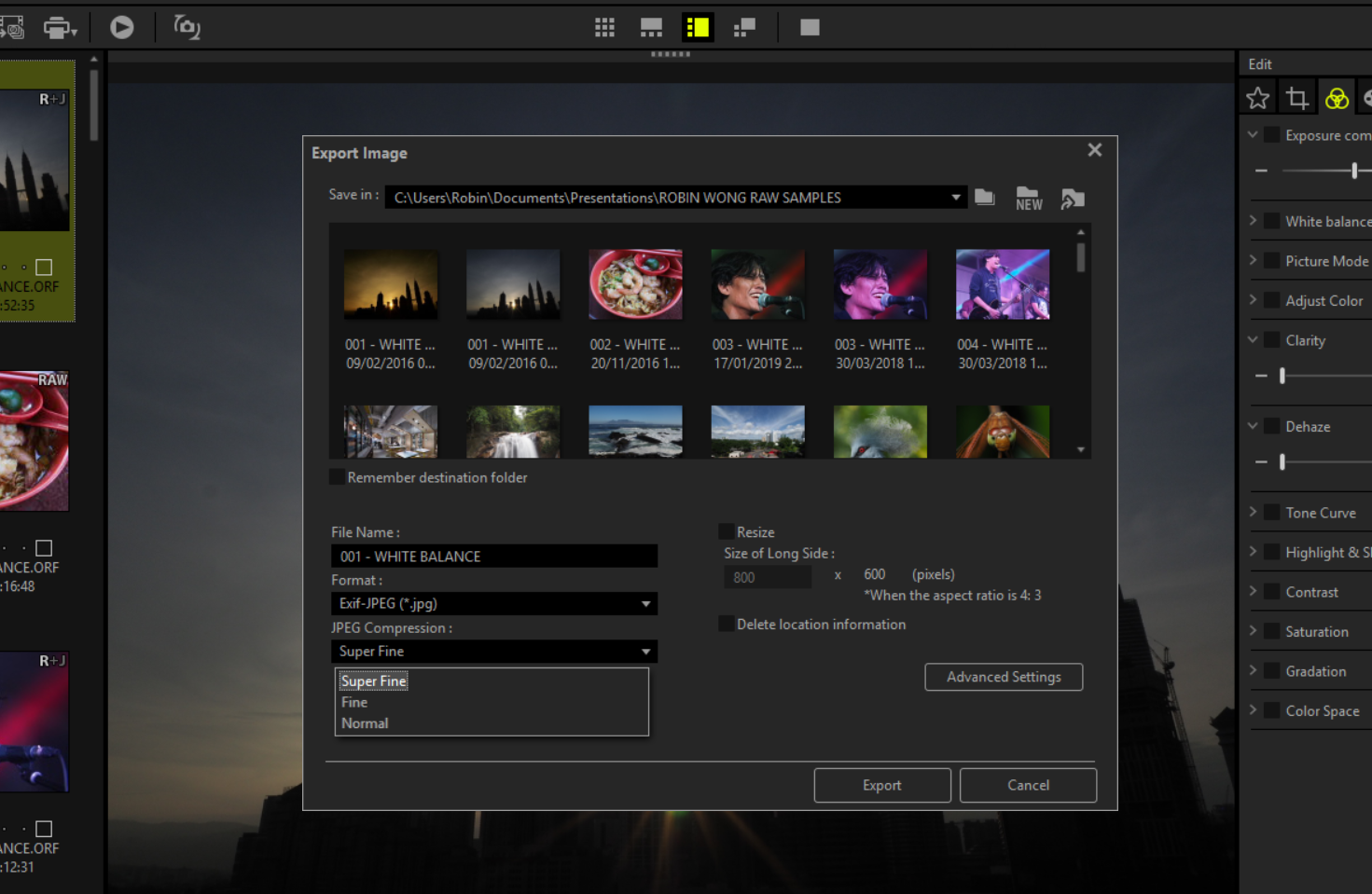 7. Exporting time is still quite slow, I did not notice improvement at all. However, when exporting single image in Olympus Viewer 3, the software locks down and you have to wait until the export process is over before proceeding to the next image. By using batch processing, the overall speed and efficiency of the Olympus Viewer 3 slows down drastically. In the new Olympus Workspace, while images are being exported (either single image, or by batch), the software can still be operated as usual with no noticeable slow down.

8. There are two new adjustment settings: clarity and dehaze. 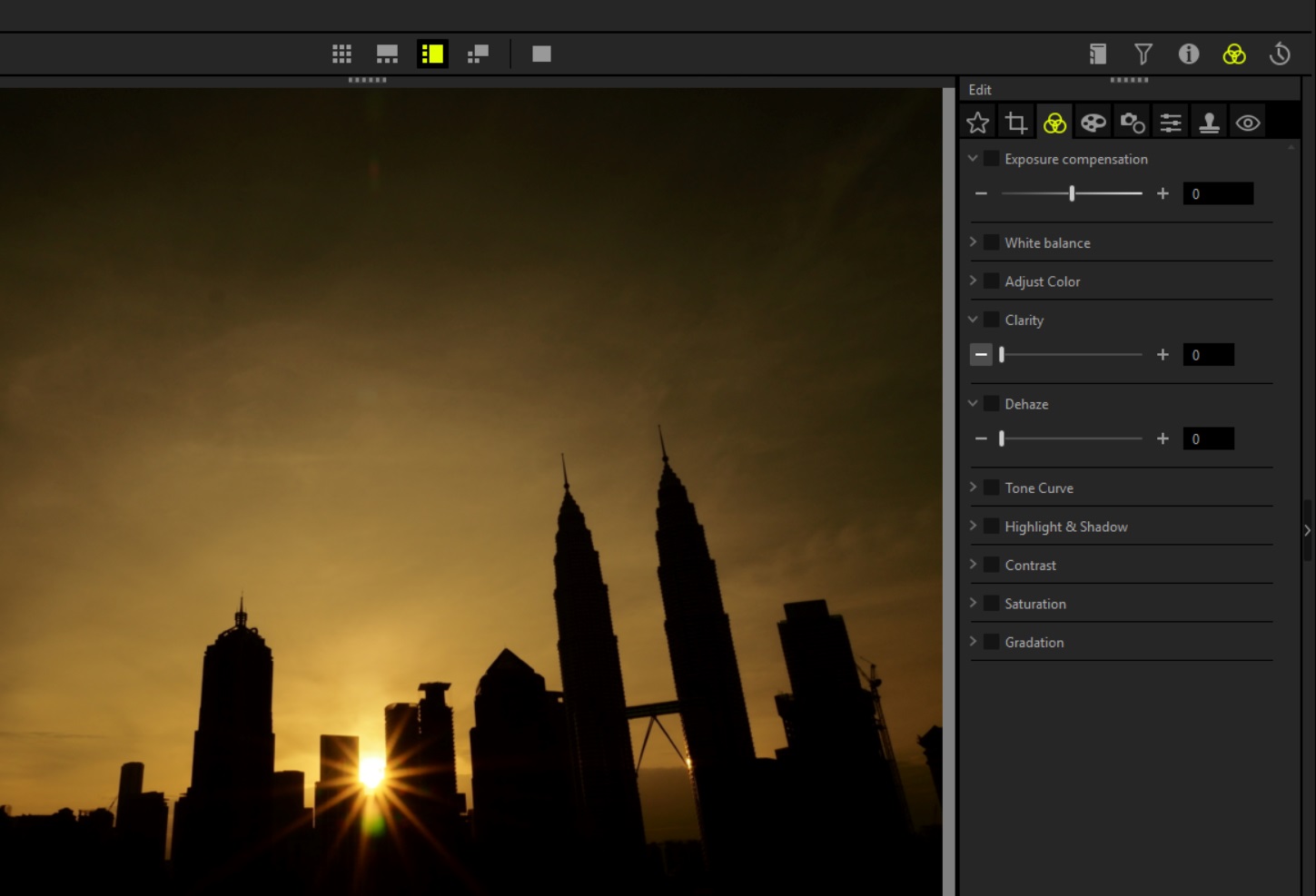 9. You will need to use Olympus Workspace hand in hand with Olympus Capture to enable full WiFi tethering support for Olympus OM-D E-M1X.

10. There is a new color editor, allowing editing of separate color channels, tweaking saturation, luminance and hue individually. However, I noticed that this color editor can only work with newer cameras, from Olympus PEN-F onward. The color editor is very similar to color profile in PEN-F while shooting in camera, but with more extensive controls. 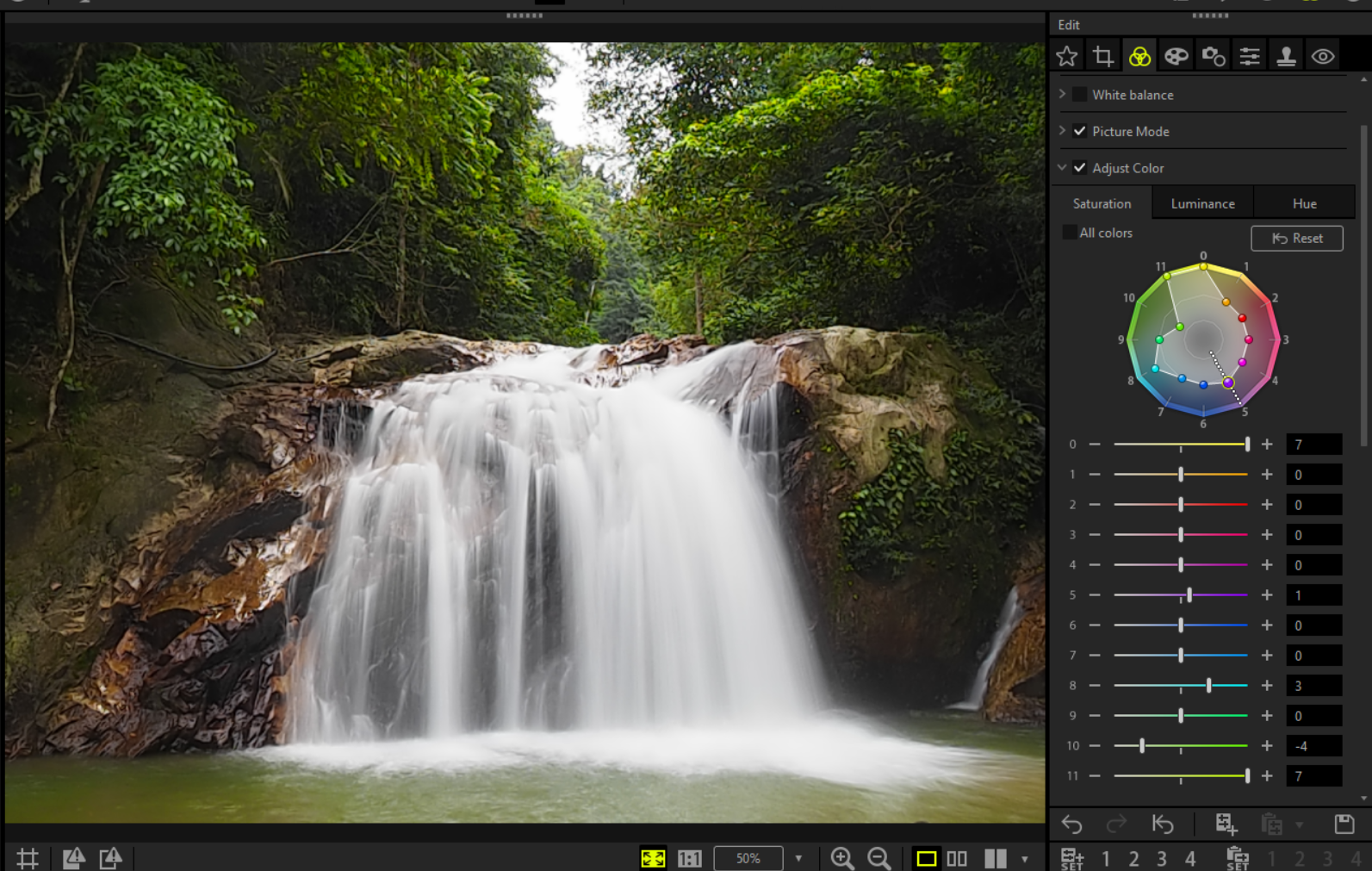 Bear in mind that the speed of operation of the software is also highly dependent on your computer's processing prowess. I have only tested the Olympus Workspace PC version. The Mac version was not available yet when I was using the software and I do not have a Mac computer to run it either way. I am currently using an AMD powered desktop PC, with Octa-core FX-8350 CPU, 16GB of RAM and an old mechanical hard disk drive (I have yet to upgrade to SSD, yes I know I am extremely late to the party). I also have the budget Radeon RX560 with 4GB Ram which the Olympus Workspace can take advantage of to have some performance boost running the software. I am sure if you have an SSD drive with latest image processing capability, your experience will be better than mine. My PC is coming to almost 7 years old now.

Nonetheless, with the exact same setup, I was also running Capture One Pro software (currently on version 10, and have tried the version 12 on trial) and Capture One was still noticeably and marginally faster in all operations. Previewing images was smoother and all adjustments applied were previewed almost instantaneously, even though I was using a now aging PC. Exporting RAW images to JPEG was the largest difference, the speed difference is so much that it can affect my overall productivity as a working photographer.

If you are a professional photographer with demanding post-processing workflow, there are many important features that are not available in the Olympus Workspace, such as layering, masking, gradual or radial filters, etc. If you need a more powerful tool for your image editing, I am sure commercial softwares such as Adobe Lightroom and Capture One Pro will suit your use better.

However, as a free to download and use with no limitations software, with the ability to reproduce the exact same 100% amazing JPEG file quality from Olympus cameras (which is fantastic may I add), I think the Olympus Workspace is a major step up from the old Olympus Viewer 3. The previewing time is now tolerable and applying editing settings is speedier and smoother in operation. I still want Olympus to continuously improve the speed of the software, the image previewing can be smoother and settings should be applied almost instantaneously. Nevertheless, it is a step to the right direction for Olympus, and all the new upgrades, including addition of new features are highly appreciated.

Since the software is free to use, why not give it a try? I would love to hear what you think! Please do leave your suggestions for improvement, I am sure Olympus is listening and we all want the Olympus Workspace to improve.

If you have found this article useful, please consider purchasing any products from my B&H affiliate link here.